I hope you enjoyed Memorial Day weekend. The holiday has been observed since the 1860s. Following the Civil War many national cemeteries were founded, and communities began honoring the fallen at their final resting places with ceremonies near the beginning of summer. Memorial Day became a federal holiday in 1971.

I always use the day to honor John Hopson Flournoy, a relative of mine, who was attending the University of Georgia when he was called to serve in World War II. He went on to help liberate Europe and was killed in France on December 8, 1944. While I never knew John, I am grateful to him and countless men and women who made the ultimate sacrifice for our country.

We also just closed out Asian American and Pacific Islander Heritage Month. We had several great virtual events. I’d like to take a moment to highlight one of our partners in the field who has done an outstanding job serving producers for many years.

Guri Bhangoo, an employee with Rain and Hail, has been involved in crop insurance for over 35 years, both as an employee for Insurance Providers and as a grower. Our office in Davis, California, interacts with Guri on a regular basis and enjoys working with him.

“He has provided leadership and general common sense to our discussions with the industry while representing AIPs and growers fairly,” explains Jeff. “From my perspective, Guri has added value to California agriculture and we greatly appreciate his input.”

Guri is the son of immigrants from India who arrived in the 1950s seeking the American dream. I’m glad I had the pleasure to talk to him recently about his experiences.

Richard: How did you first get involved in agriculture?

Guri: I grew up with agriculture. My dad worked for the Standard Fruit Company as an agronomist, growing and shipping bananas from Honduras to New Orleans. I was born in Honduras, but we later moved to Louisiana, then Arkansas, and finally we settled in California where my dad became a professor of agronomy at Fresno State. I also received my bachelor’s degree in Agriculture from there. My dad bought a raisin vineyard in 1976. I took over the farm when he retired. Today, I grow sweet cherries, almonds, grapes, raisins, and organic blueberries. 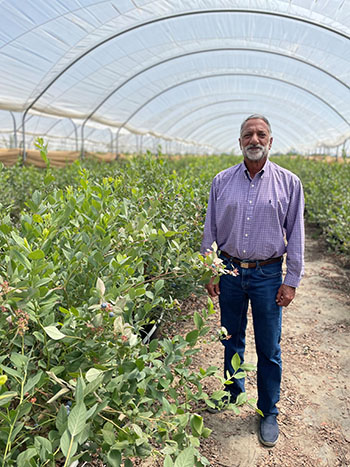 Guri Bhangoo, AVP Marketing for Rain and Hail, in his greenhouse where he grows blueberries.
Fresno, California

Richard: And now you work in crop insurance and have for some time.

Guri: Yes, I began in the mid-80s as an adjuster and was eventually hired by Rain and Hail Insurance full-time. I started out as a Field Supervisor, then Claims Manager and now AVP Marketing for the California Division of Rain and Hail located in Fresno. I love my job assisting the American farmer in creating financial stability in the event of crop losses.

Richard: It sounds like a very interesting story to me. We’re celebrating Asian American and Pacific Islander Heritage month right now. What are your thoughts on this month?

Guri: I think it’s important to recognize the contributions of all cultures to our society and to educate minorities, particularly in agriculture, because many are unaware of programs that are available to them. For example, many Asian American producers are small growers and they are not aware of options that would be of great assistance, whether it be FSA and NRCS programs, crop insurance, or beginning farmer incentives. There is a greater emphasis on outreach to these communities today and it needs to continue. We need to get the word out. Sometimes the language barrier can be a challenge. But I think USDA has done a good job of making materials available in other languages.

Richard: You have had a successful career and are held in high regard by the agricultural community in California. What advice would you give to people beginning their professional pursuits?

Guri: When we are hiring somebody, we generally look for someone who is a college graduate. And it’s not incredibly important what your study was. Having a degree demonstrates that you have the discipline and initiative to start and complete something. Most businesses will train you. You can be trained. There are a lot of opportunities in agriculture – whether you are a grower, a chemical specialist, or selling farm machinery or crop insurance.

I want to thank Guri for taking time to talk with me and share some insights.

I would encourage you all to visit the Smithsonian’s National Museum of American History website which has great online exhibits about Asian American and Pacific Islander heritage.